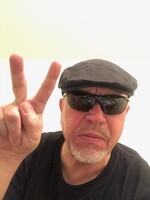 Michael Edward Pawlowicz, age 66, passed away on Thursday, April 15, 2021 at Caromont Regional Medical Center in Gastonia. Born in Chicago Illinois on August 28, 1954, he was the son of the late Edward John and Helen Constance Ragan Pawlowicz. He was a signalman for the Railroad. His passion and first love was the guitar, which he taught himself. In addition to his parents, Michael is preceded in death by his daughter; Angela Fekete.

A private service will be held at a later date.

All rights reserved. This obituary is also archived at obittree.com